Had a GREAT reading at Hugo House last night! 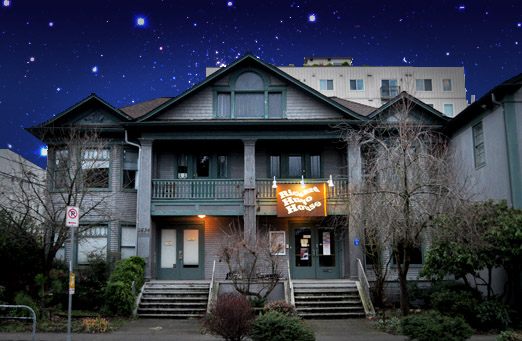 Q:  It’s Tuesday, around 8:30pm…do I know where my Teen and Tween are?
A:  Yes, at home…doing “catch up” farm work in the garden with Papa!
Q:  What books are on my ping pong table?
A:  Too many!  LoL…
I’m very happy about this excerpt! Last night was wonderful!

The weather was lovely, which means
sun was breaking in through the windows as I sat,
looking at Richard Hugo quotes tucked in under the glass
table tops…

After I read, the audience was very appreciative,
and a woman at my table asked if I had more like this…when I said yes, she
nodded and said, “Good.”

As you’ll see in my next post,
I am exploring the role of “relevancy” in fiction. This passage comes early
in my novel, and it sets the tone for “social and political awareness,” which
I believe is growing in the world today. For those who find themselves
questioning much about the world, here is a character just like you.
Enjoy…I hope!

Richard Hugo House Reading
June 3rd, 2013
Excerpt from Chapter 2
The boy was maybe twenty and he wasn’t skinny. He was skeletal. And, over the next ten minutes, as he attempted to flirt with the girl behind the counter, he managed to make Spanish sound like the least romantic language on the planet. I flipped idly through the deck of cards, and tried not to hear his high-pitched southern twang.
As I turned over the last card, and lost, the boy’s offended outburst caught my attention. “I mean, really!  What’s up with that?”
The barista gave a short laugh as she poured shiny, black beans into the hopper. “Get over it, Tommy. Así es la vida, no?  Really…are you so surprised?” She flipped a switch, and whatever he said next was drowned out by a ferocious growling sound; followed almost instantly by the sharp tang of shattered espresso beans. I sucked in a deep, satisfying whiff as the girl’s reply echoed through the small space.
“Right? Wrong? Who cares? It is not so different from the Titanic, eh? The rich can pay…”
The boy – Tommy? – jerked upright, his whole body rigid, and interrupted the girl. “Two wrongs do not make a right.” Then he cocked his head to the side, unintentionally striking a comical pose. “How do you say that in Spanish?”
“Dos errores no hacen un acierto.” She supplied, as I noted the boy’s sincere expression. Apparently, this young American had a conscience. A rare trait, some would say. He also had a tattoo. On the right side of his neck; a bold yet simple caricature of a sharp-featured male face.
“Escucha mi querido…” The girl said, leaning across the narrow counter that separated them. “I don’t know what it’s like in America, but here? Money matters. Comprende?”
Skeleton-boy drew back, perhaps struggling to pair the girl’s outwardly rebellious body art with her apparent complacency; and gestured helplessly with one hand. “You’re okay with it…?”
“Of course not!” The girl retorted, angry now. “But it doesn’t matter what I think, now does it?”
“So, you’re just going to give up?”  Disbelief tinged his voice.
“Give up?” She repeated, as if the words were distasteful. “It’s not about…giving up. It’s…well…I can barely keep my daughter in preschool!  ’m late on the rent, and we ran out of heating oil last Winter. This goes way beyond how I want things to be…Tommy.”
“But…”
“But nothing.” The girl sounded sad all of a sudden. “Look, this guy could be royalty or some mega-millionaire’s son. Hell!  Maybe his daddy owns the train! But, whatever or whoever he is…I can’t do anything about it, so I’m not going to try.”
I shivered as the defeated tone brought back childhood memories best forgotten. I had grown up traveling from ancient fishing village to isolated town to barrio, and the voices of the disempowered was ingrained in my soul.
Tommy, however, either couldn’t hear it…or didn’t want to. “But…they bumped hard-working people out of their seats, as far back as Madrid! All for some rich brat who wasn’t even coming aboard until Barcelona!” The boy seemed to have forgotten I was there, as he took his anger out on a couple of innocent cardboard boxes. “And. You. Won’t. Try?”
I winced, as the boy plowed over the girl’s hard life. As if her circumstances were irrelevant. Of course, nothing could be further from the truth. Since the bust of 08, times were hard everywhere. The young men of our small town, Alfarras, seemed to bounce back and forth between anger and despair; fully aware that their opportunities had been stolen by the unscrupulous who now showed up in their chauffeured Mercedes and thousand dollar suits, with promises to fix everything.

The newspapers tried to blame the collapse on overly-generous social programs, homeowners who fell victim to predatory lenders, or tax evasion by, of course, the middle class. Lucia wouldn’t talk about it. To her, newspapers were only good for starting a fire on a cold morning. But last year, Tom had willingly fielded my questions and his arguments made the most sense. He believed the working class was skillfully manipulated into excessive consumerism for two reasons. First, it allowed the corporate elites to make billions off our labor, and secondly…it kept us so busy that we never had time to ask if we actually liked living this way.
That’s how I knew my Father and Tom would have gotten along. He used to say the same thing. He saw the dangers of de-regulation, and predicted both the bubble and the inevitable “pop,” long before the newspapers began hinting at “austerity measures.” Before the men and women of Alfarras began to look grim.
The girl’s answer was soft and succinct. “Estoy tan cansada…”
“I’m tired, too. But…I’m not ready to give up.”
The girl’s plight – and Tommy’s convictions – rang like a gong through the steamy aroma of despair, espresso and passion.  My chest tightened, strong emotions whirling about, seeking escape. I couldn’t judge this young Mother her feelings of weakness or irrelevance. In our world, it is so much easier to ignore injustices.
Turn a blind eye.
Give up.
Settle.

I understood why people did this. But I hoped it wasn’t true; the idea that there was no hope. Surely there was something we could do?