Echoes of Today in the Literature of Yesterday 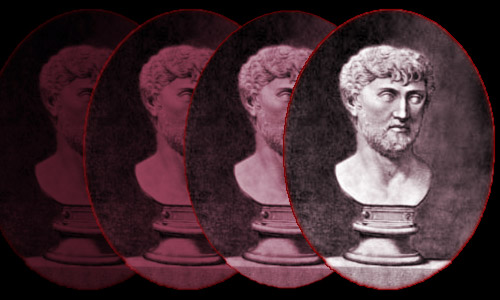 Today, I finished re-arranging our family room, and that meant organizing our family’s books.  Big, colorful picture books, thick resource-sized books on dinosaurs, birds, the Bushmen of the Kalahari Desert, Beatrice Potter, and (this would be from my husband’s past) a ginormous book about Porsche.

So, my husband is big into philosophy and the human condition, which means his shelves are filled with the writings of many notable thinkers of all eras of humanity…including Lucretius.  Recognize the name, but don’t know much about him?  Me neither…so here’s a small bit before I share a passage that caught my eye from the text of his poem.

“Lucretius might, just possibly, have been born in the same year as Julius Caesar…his floruit, therefore, was in the later years of the Roman republic, well on its way to empire, world dominion, and power…” and, I would suggest, already showing the signs and symptoms of it’s eventual decline and collapse.

In a way, we might say, his times echo our own…or visa versa.  And so, here is a passage I think you will find intriguing…an example of poetry which surely sought then to inspire social change, and which due to its lasting relevance, may allow the author to extend his message forward by two thousand years…to now.

For this they work themselves to death, worn out,
Exhausted, spent.  As if that weren’t enough,
Each partner waits the other’s beck and call;
Assets are spent on Eastern luxuries,
Duty is shirked, and reputation reels,
Palsied, blind-drunk.  But aren’t those lovely things
She’s wearing? – those cute sandals on her feet,
Those great big flashing emeralds whose light
Is set in gold, that sea-dark robe de nuit
Worn all the time, its texture barely proof
Against love’s stain and sweat.  What father left
Turns into coronets or necklaces
Or an expensive lovely silken gown
From Ceos or Alinda.  And it all
Adds up to nothing – banquets, rich attire,
Food, entertainment, gambling, drinks, perfumes,
Since from the fountains of delight one jet
Spurts such a bitterness the flowers wilt
All through the garden.  It may be the mind
Gnaws on itself in guilt, or conscience cries
Against such indolent wanton suicide…

I cannot help but sense Lucretius’ dismay at the excesses of consumerism, which all empire-cultures excel at, suffer from, and self-destruct over.  Nor can I avoid the question, “When future generations look back upon us, for what will we have destroyed the world?”