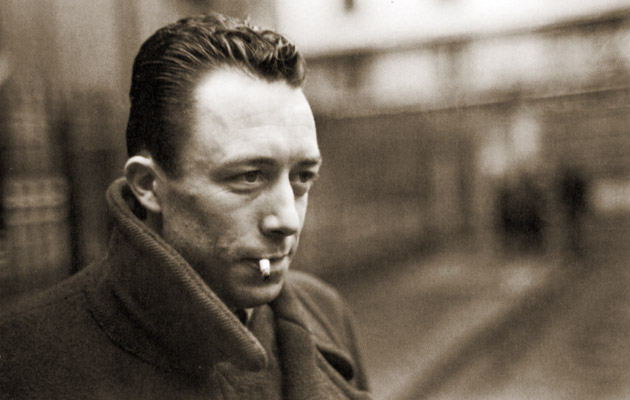 “Fiction is the lie through which we tell the truth.”

I stumbled across this fabulous quote while reading a book that’s bursting with excellent writing-related quotes…but more about that later.  For now, I’d like to take Albert Camus’ premise and run with it!
The ultimate premise of my blog is that we can inspire change more deeply and more immediately through the emotional roller coaster of fiction…that by reaching the heart of a reader, we more concretely change her than if we were to write to her head. In other words…
“You should change your lifestyle for these reasons,” leaves a distinctly different imprint than a short story, poem, or novel which sends the reader tearing through the house looking for that second box of tissues, her face blotchy as tears drip off her chin.
If you like this idea, and have the guts to put your ass in a chair and write for a few weeks, months, or years (did I mention decades?)…then you might be an actopian fiction writer in the making.
What, say you, is Actopian fiction?
Where Albert’s quote explains the what, Actopian Fiction offers us the why. What do we do with fiction? We use lies to express a truth. We use a story to explain history. We fantasize in order to make truth more palatable. WHY do we do this? Because we want to drive home the point in a way that can be absorbed, accepted, and remembered.
Actopian fiction writers SET THIS GOAL when they begin.
And so, let us consider Suzanne Collins’ explosively successful Hunger Games Trilogy. We’re not forcing children to fight in a deadly arena…so, how can this be a story (a lie) which tells a truth? Easily, I say…and here’s how.
(1)  If we look to the past, this story is practically a history lesson. Various empires, most notably for Americans – the Roman Empire – not only subdued its territories somewhat viciously, but demanded TRIBUTE, very often in the form of slaves…and there were plenty of slaves that ended up battling it out in the Coliseum. Pretty much any and every conquering empire has engaged in brutality to reach their goal.
(2)  More to the point, if we look around us, we need not stretch our imaginations too far to see the relevancy of Suzanne’s work to the modern world.
Long story short, Suzanne Collins’ spectacularly written books and movies (did you know Suzanne Collins was one of the screenwriters?) are sweeping the world NOT because they are good fiction (which they are)…but because they are telling the truth through a lie.
We know it.
We can feel it.
We can relate to it.
Like the wildly decorated, superficial and child-like citizens of The Capital, once we connect with and begin to care about those who are suffering from Out-of-Control-Capitalism, we too…will want things to be different. We will desire change and be willing to put our lifestyle where our mouth is!
Like desperate President Snow, global leaders are trying to sell the citizens of every first world nation (and even those of the 3rd world) a story that keeps us distracted and disorganized, even as our planet is cannibalized around our ears.
Thankfully, there is hope offered in The Hunger Games!
Perhaps, like Cinna, Effie Trinket, and Plutarch Heavensbee…we, the citizens of the International City Centers of Power, will notice. Will demand change. Will join with the growing tide of leaders within the third world…to create a more just and equal world for all.
Where there’s a will, there’s a way.
Don’t miss my previous authors! Archived here: www.voiceofvashon.org/prose-poetry-and-purpose