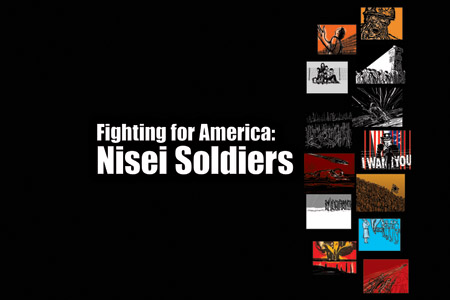 As I sat at my campsite, editing this interview, I couldn’t help but feel an upwelling of appreciation for my author’s commitment to raising awareness. It’s not often that you meet a quintessential enlightener of minds. There are plenty who aspire to this goal…but so few that actually achieve it. Lawrence is one of the few.

On Saturday, September 12th, from 1-4pm, there will be a book release & signing of Fighting for America: Nisei Soldiers @ the Wing Luke Museum. A collaboration by writer Lawrence Matsuda and artist Matt Sasaki, this graphic novel tells the story of six brave and courageous Nisei soldiers from the Pacific Northwest who proved their loyalty and made a significant mark in American history. Featured veterans include:

The six stories are based on real and actual events, which were dramatized and translated to meet the visual and narrative requirements of a graphic novel. Fighting for America allows readers to experience the courage, camaraderie, anger, loss and strength of the Nisei soldiers in a new, engaging way.

“Matt Sasaki’s illustrations are refreshingly original, beautifully expressive, and perfectly supplement the stories about the heroic achievements of six American patriots. Whether you favor reading or looking at graphic novels, this one is definitely worth your time,” noted artist Roger Shimomura.

The 224-page graphic novel is accompanied by a curriculum guide, a stand-alone chapter An American Hero: Shiro Kashino, and an animated video short produced by the Seattle Channel. A teacher workshop will be held on Saturday, October 10 from 9am-3:30pm with registration through The Wing (http://www.wingluke.org/fighting-for-america).

According to Toshiko Hasegawa of the Japanese American Citizens League, Seattle, “There is great bravery in the honesty within the pages of this book. This same courage affords us the benefit of yesterday’s lessons, today’s blessings and the hope we harbor for still a better tomorrow. These stories don’t just describe what it was to be Japanese – they describe what it means to be American.”

Prose, Poetry & Purpose
can be heard on 101.9 FM KVSH
11am-12noon, every Saturday & Sunday
or
On Demand (24/7) beginning Tuesday, September 8th:
http://www.voiceofvashon.org/prose-poetry-and-purpose
———————————
Where can I find Lawrence Matsuda’s Books?
–A Cold Wind from Idaho (Black Lawrence Press) is available through Small Press Distributors ($14 retail).
–Glimpses of a Forever Foreigner (CreateSpace) is available at Seattle’s beloved Elliot Bay Bookstore or on Amazon ($21 retail).
-The Shiro Kashino stand alone graphic novel is available through the Wing Luke Museum and the Nisei Vets Committee Foundation.
-The full graphic novel (which includes Shiro), Nisei Soldiers: Fighting for America will be available at the signing on September 12th event ($35).
Don’t miss my previous authors! Archived here: www.voiceofvashon.org/prose-poetry-and-purpose