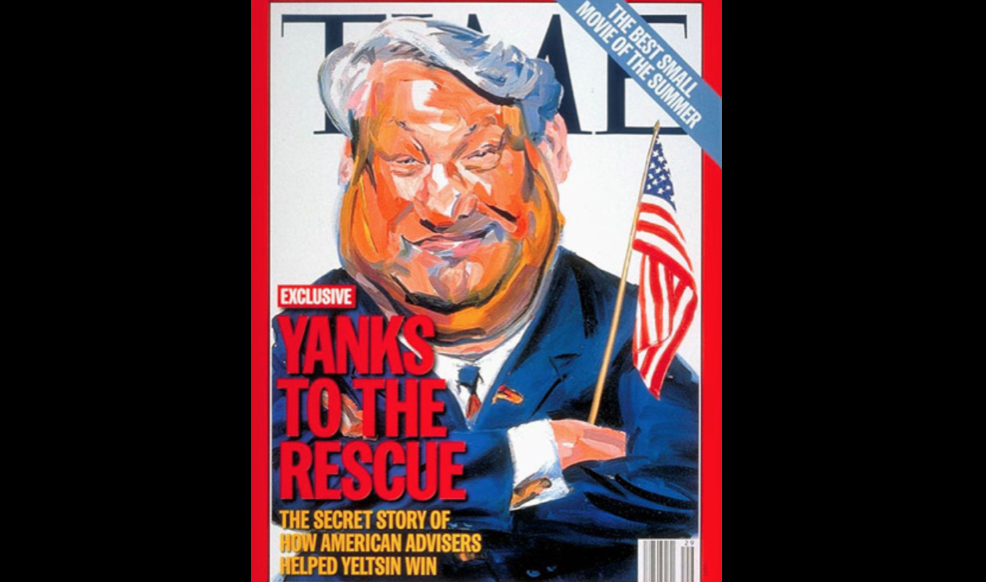 As the producer & host of Prose, Poetry & Purpose, I interview people who seek to inspire positive social change around the world – specifically through writing. To do this, there is one other condition I adhere to without fail. Global Viewpoint. My guests come from a dizzying & growing array of time zones, cultures, philosophical backgrounds, political environments, and language. The potential power of this show comes from the kaleidoscope of viewpoints it offers, as my upcoming guest proves so eloquently.

Ever since November 2016 a fair portion of the chattering classes in the US have been chattering about “Russian meddling” in the presidential election. The details keep changing, but the story stays the same: big bad Russia has somehow corrupted American democracy… as if American democracy wasn’t corrupted to begin with. Did the DNC not rig the primaries in favor of Clinton? Was the FBI not ordered by Obama to stop investigating Clinton for mishandling state secrets? Was Clinton not handed debate questions prior to a debate? Did she not receive campaign contributions from shady foreign oligarchs? And did she not, technically speaking, win the election, sclerotic electoral college weirdness aside? It seems that “Russian meddling,” if real, would be pretty far down the list of things that are wrong with American democracy; on the scale of emergencies, “house on fire” generally rates higher than “squirrels in the attic,” wouldn’t you say?

Perhaps you disagree with this assessment. In that case, there is another consideration for you to take on board. Provably, the US is not a democracy at all, implying that there is nothing for the Russians to meddle in. A Princeton University study by Gilens and Page performed a regression analysis on over a thousand public policy decisions in the US, and determined that the effect of public opinion on public policy is nil. That’s right, nil. It doesn’t matter how you vote because your vote doesn’t affect the outcome in any measurable way. By extension, that also goes for protesting, organizing, dousing yourself with gasoline and setting yourself on fire on the steps of the US Senate, or whatever else you may get up to. It won’t influence those in power.

And who are those in power? They are the oligarchs, of course, the people who own just about everything, including your good self. Yes, to them you are property. Gilens and Page determined that the opinions of the economic elite and of business groups do have a profound effect on public policy. If this group is dead-set against a bit of policy, it will not be adopted: 0% support by this group means no chance of the policy being adopted. If, on the other hand, this group is 100% behind something, the chances of it being adopted skyrockets up to 70%. In short, while voting for or against an issue matters not a whit, throwing lots money at one or the other side of an issue does matter a great deal. The political parties, the campaigning, the electioneering and all that nonsense is just for show.

So, why is there now a sudden need to concentrate on nonexistent “Russian meddling” for 15 months straight? I believe the answer is obvious: the show that is the equally nonexistent “American democracy” is no longer fit to be aired, and the audience must be misdirected to look elsewhere. The whole system is breaking down. Remember the debt ceiling? Don’t bother, now the sky is the limit—until something snaps, which it will, and then your plastic will stop paying for things. The US just bombed Syria, again, and… all that happened is that the Syrians went out into the streets to celebrate their victory, because nothing happened except some bright flashes and loud explosions 5000 meters up in the sky. The CIA, in the person of Mike Pompeo, just took over the State Department. Diplomacy? What’s that about? The US president just claimed the president of France a his toy boy. Foreign relations? Sorry, that’ll have to wait, the gentlemen are busy! Yes, it’s all turning into a joke, but you better not tell anyone! That would be like shouting “Fire!” in a crowded theater: if enough people realize what’s happening, it might cause a panic and someone might get trampled underfoot.

Meanwhile, there are a lot of problems in the United States, and they aren’t being solved. Here’s one example: suppose you wanted to prevent the US from falling into a debt hole. Well, then you’d need to start making stuff instead of importing it. But here’s a problem: the average individual income in the US is around $27,000 a year, which is, by international standards, a bit too high for a manufacturing business to remain internationally competitive, but never mind. Now, health insurance for a family of four (where daddy works at a factory making stuff while mommy is busy bringing up the next generation of industrial workers) is around $26,000 a year. So, fine, the family has $1,000 a year for everything else. But then what if somebody gets sick? Well, then there is a $8,000 deductible to pay off before health insurance kicks in. So, if the family lives outdoors, drinks rainwater and eats dandelions for eight years, they might be able to survive a single serious illness such as appendicitis (there is a 40% chance that somebody in a family of six will get it, and that’s just one common ailment out of many). In short, if you want to do something economically useful in the United States… don’t even bother. The system is not set up for you to succeed.

This is all quite depressing, isn’t it? Perhaps that’s why something like a quarter of Americans are on antidepressants. Look at Nikki Haley, the US representative at the UN. Note that glazed, deer-in-the-headlights stare, and that half-scowl. Note the delusional behavior: a few days ago she tried to single-handedly impose new sanctions on Russia. When challenged, she insisted that she was right and the White House was wrong… and then stood corrected. If you thought that having delusional people at the UN Security Council is a bad idea, then you would be correct.

What antidepressants do is make it possible for people who have objective reasons to be depressed (such as that their country is falling apart) to start each day with a smile and a winsome, up-and-at-’em attitude that is entirely uncalled for. Antidepressants allow them to delude themselves into thinking that “everything will be all right” when it most definitely isn’t and never will be. And when a quarter of the people in the room are delusional, then seriously faulty decisions get made and things tend to go from bad to worse.

If antidepressants aren’t your thing, there are also opiates. Overdose deaths in the US stood around 60,000 in 2016, a 20% increased over 2015. At this rate of increase, in less than a decade half the people in the room will be nodding out and no decisions will be made, faulty or otherwise. To my mind, American junkies are less of an international threat than Americans on antidepressants are. Junkies in the US generally start out with a prescription for “pain” (because life in the US is indeed painful). When that runs out they switch to Afghani heroin, which is cheap and plentiful thanks to the ongoing US occupation of Afghanistan.

But what is there to do if none of this appeals to you? Well, it’s springtime, so go and plant some things! Plant some arugula and some cherry tomatoes—they go well together. Grow some chili peppers, to spice things up. Then, in a few weeks, you’ll have to spend some time battling weeds. That should take your mind off things—like the fact that your country is falling apart. In any case, that’s what I plan to do. And if there’s a squirrel in your attic, try setting out some nuts to lure it out.

For my local listeners, Dmitry’s interview will air April 28th & 29th, @ 11am on 101.9 FM
For my farther away listeners, PP&P interviews come available
the first Monday after the show airs, as a podcast.

Note: This is a guest blog post. It represents the thoughts and ideas of Dmitry Orlov.