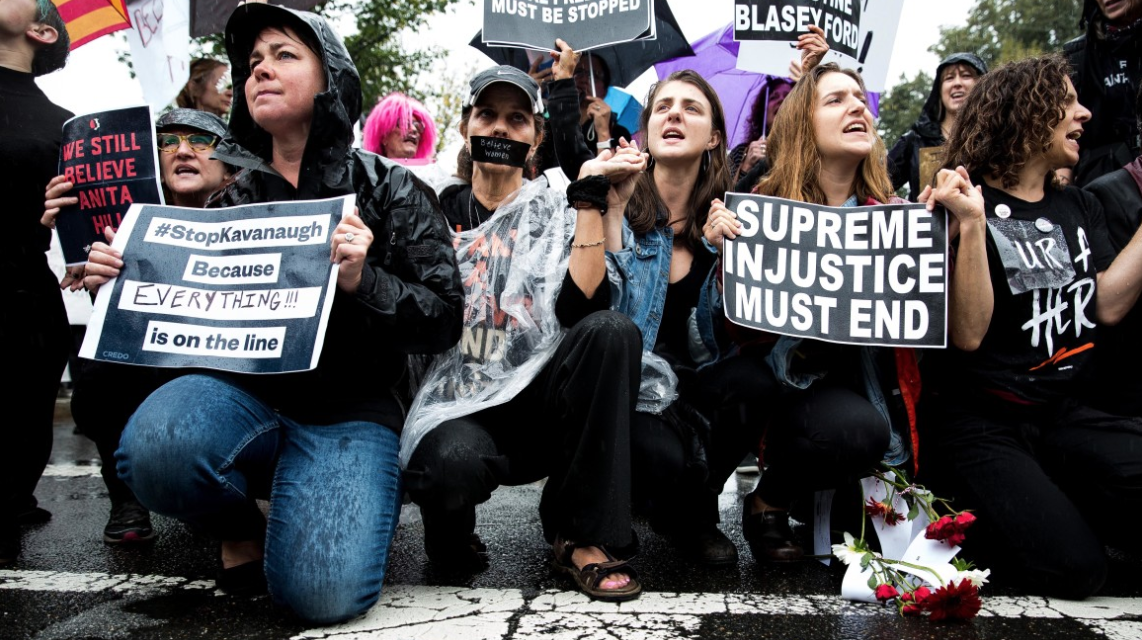 First, if the term “mansplaining” irritates you, go HERE to learn what the term actually means.

Now, for all the MEN who have been openly critical of women who are protesting in Washington DC this past week…listen up! You are not capable of understanding the frustration that is felt by women in this country.

Yes I just said that and I meant what I said. No, don’t start telling me why I’m wrong. You’ve only read three sentences so far. (Keep reading and try to understand what I’m saying.)

When the highest leaders in our government actively express and promote and engage in the “arguments commonly given to support our rape culture,” it should trigger outrage in women who understand what is happening right now, the direct and lingering effects going forward, the backward slide that’s occurring, and the terrible harm that will come of it. For the sake of future generations, far more than our own selves, people who want Equality For All….should (and do) care about the details.

As a result of the Dr. Ford/Kavanaugh debacle, it is a fact that men, especially young men who are looking to older men to give them examples of how to become men, are going to feel far more comfortable raping young women at college parties than they would have if the people in power had handled the Dr. Ford/Kavanaugh situation differently. As my husband puts it, “trickle down immorality is a very real thing.”

If you doubt the prevalence of sexual abuses on campus, consider this: “A recent university survey found that 43 percent of senior female undergraduates said they had experienced nonconsensual sexual assault or misconduct.”

YET, MOST RAPES GO UNREPORTED, FOR THESE REASONS:
• Fear of reprisal
• Personal matter
• Reported to a different official
• Not important enough to respondent
• Belief that the police would not do anything to help
• Belief that the police could not do anything to help
• Did not want to get offender in trouble with law
• Did not want family to know
• Did not want others to know
• Not enough proof
• Fear of the justice system
• Did not know how
• Feel the crime was not “serious enough”
• Fear of lack of evidence
• Unsure about perpetrator’s intent
(The red ones were my reasons for not reporting my rape.)

Poor & privileged young men alike have just been given a HUGE GREEN LIGHT to go forth and “fuck that drunk bitch,” knowing their lives will be minimally affected. Why not? Look at Kavanaugh (and Trump)…they got away with it!

Ironically, when the shoe is on the other foot, we see a very different outcome. Consider the incredible support that men receive from women when THEY are the victim. Whenever I’ve read about men who speak up about being molested by a Catholic Priest, I see women jumping to their defense. Horrified by the crime. #WeBelieveYou. Now imagine that the President, the GOP, and the Judiciary got together and scoffed at a victim’s story, defended his Catholic rapist, and further empowered pedophiles within the church? How would you feel?

Now, to all the men who roll their eyes at women who are expressing outrage and other powerful emotions in Washington DC … WTF?

Kavanaugh acted like an outraged, spoiled, out of control, rude, obnoxious jerk. He was openly hostile and insulting to American Senators. AND…this was allowed, tolerated, encouraged by the man who sits in the Oval Office, and generally viewed by the GOP as acceptable. Not just for a person, but for a man who’s job it was to prove to us that he could serve honorably on the Supreme Court.

Despite HIS histrionics, he was confirmed. Why? Male privilege.

Dr. Ford, meanwhile, behaved with impeccable honor, showed respect to every Senator, and maintained admirable self control. This, of course, was EXPECTED of her because she is a woman. She does NOT enjoy male privilege. She couldn’t get away with the display that Kavanaugh offered to the nation. Adding insult to injury, Dr. Ford is still being psychologically stoned & dragged through the streets!

THIS DOUBLE STANDARD IS EMBLEMATIC OF AMERICA’S RAPE CULTURE & DEEP SEXISM…and this alone, is worthy of massive protest!

MEN. You need to listen to women who have been victims of rape, sexual assault, patriarchal abuse in the workplace, been grabbed between the legs by incredibly ugly men, been drugged and set up for work meetings & auditions that are created by men who want to fuck someone without her permission, and so on.

MEN. You need to clamp those lovely lips together and use the ears God or Mother Nature bestowed upon you. Think outside of the comfortable, patriarchal, male privilege box you’ve enjoyed living in your whole life. Do so for a week. JUST LISTEN. Don’t respond, argue, disagree, or mansplain. JUST LISTEN.

And, if you still can’t get your brain wrapped around the female perspective, consider this. Black men who joined the Black Panthers, armed themselves and expressed hatred towards white people were not doing it wrong either. They had just cause to speak up in a powerful manner; because the “white power dominated” society was comfortable terrorizing them. They could not leave the system the way it was AND achieve justice. Revolutions happen because they are necessary. Because asking nicely isn’t working (and won’t). Revolutions pull us out of existing, unhealthy systems (which is what MLK was also doing) because those systems are committed to never, ever giving up power. To achieve change, we must experience discomfort until finally, eventually, we allow new ideas to enter our minds.

Do you remember how horrifying it was a year ago to read all the stories all of the women you knew were telling about what happened to them in elementary school, at church, at home, in middle school, in high school, in college, at the workplace, and everywhere else? Do you remember the POWER you felt when you knew you were truly not alone?

It is time to share our rape stories. All of them.

The men of our culture do not need us to go on strike and put a black square where our face would be on Facebook. They won’t give a damn because we don’t wash the dishes or sweep the floors for a fucking day. They need to open up Facebook and see nothing but rape stories. They need to HEAR, SEE & READ THE TRUTH.

QUESTION: Why do we see photos of college rapists and never see photos of the woman who was raped? Why do we give attention to the perpetrator and essentially avoid or ignore the details of the crime?

– If you say, “because the woman would be ashamed,” THAT is a problem. SHE did nothing wrong, so WHAT has she to be ashamed of? Oh, right…she IS being told it was her fault. SHE drank too much alcohol, SHE previously rebuffed a young man’s advances, SHE didn’t bring mace or a bodyguard with her, SHE didn’t come up with a plan to make sure no one could rape her that night and SHE drank out of an open cup so it’s HER FUCKING FAULT that she got drugged? NO. NO, NO, NO.

– If you say, “because we don’t want to glorify rape,” THAT is a problem. The DETAILS of the rape are terrible and boys & girls need to view them as so. The Hunger Games didn’t capture the imagination of millions by avoiding the details of kids murdering other kids. What was wrong was being shoved into our faces and so…we cared.

– If you say, “because she doesn’t want to talk about it publicly,” THAT is her choice. I’m not saying we should force a victim to go public. I am saying it would be beautiful if women could speak up and know that they would receive respect, admiration, empathy and support.

Your life experience, my life experience, our neighbor’s life experience, our mothers, grandmothers, everyone out there has a story of being preyed upon sexually by men who grew up in America’s rape culture. If we all share ONE of our stories (whatever the details, however bad the assault, or grossly unfair the sexism) each day……FB will be flooded for months!

MEN DON’T REALLY KNOW HOW BAD IT IS, BECAUSE THEY’RE NOT MADE TO KNOW.
It is our responsibility to start telling the truth. Don’t protect your father or your husband or your boyfriend or your son or anyone else from the truth. Nothing will change until WE ALL understand how bad it is.

My Rape Story.
What is yours?