New Deal? How about a New Narrative? 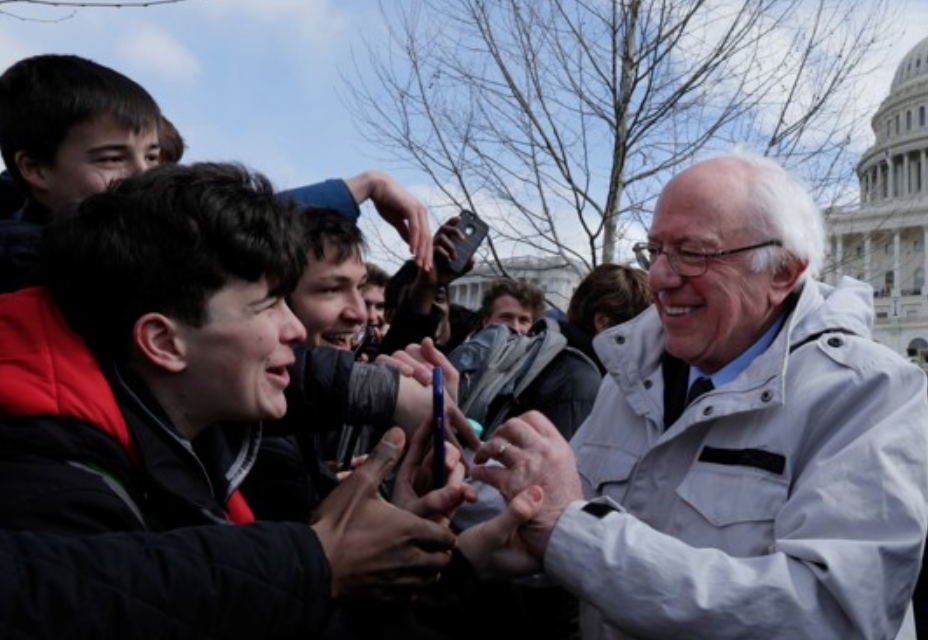 Today, the movement triggered by Bernie Sanders’ 2015-2016 Campaign for the Democratic Nomination gets a lungful of fresh air. Yes, he will run.

The 2019-2020 Campaign for the Democratic Nomination will be nothing like the last one. Nothing. Totally different! Except for one thing. The players on the field remain the same.

American Politics is defined by money. It’s sort of like high school baseball. A tour bus rolls in and kids from the only private school in the district pour out, prepared to do battle with their economic inferiors. Usually, the rich kids dominate the league, benefiting from years of perks & privileges they’ve enjoyed since their first game of T-Ball.

Make no mistake, “we the people,” are the working/servant class kids from the wrong side of the tracks, in a new kind of town where the tracks make a tight loop around the pinpoint center. Feudalism in Europe appears to be a popular template for the Neo-American Nobility. Sadly, this state of affairs is becoming more and more accepted as a natural result of human nature. Inevitable, even.

That’s the million answer question! Or is it? Some may disagree with me, and surely many will leap valiantly down the proverbial rabbit hole, loudly and proudly extolling the virtues of doing so, but I have another suggestion. Skip the trip and take the long view. Back it up a bit. Make an L with each hand, twist one wrist, lift them to your face, and try to fit the whole picture into that limited frame. It’s not possible, is it? Even if you could see everything in front of you, there’s behind you, to the side, over that nearby hill, beyond the far off mountain, and out of sight beyond the horizon. You can’t see the whole picture, by yourself. So, before you get led astray by those who promise to lead you to “the answer” somewhere in them thar woods…take a breath. You are not alone.

In 2015-2016, most Americans (and a surprisingly high number of non-Americans) saw deeply into the bowels of American Corporate Politics. It’s ugly down there. Who needs to do that again? It’s not like there’ll be a patch of vivacious and healthy microflora around the next intestinal curve. The guts of the current system are inflamed, polluted, malfunctioning, and diseased…a perfect mirror of the effects our Old Narrative culture has had on the planet. Mucking around one second more, is a waste of a good second.

March’s Top 3 Fave Lessons Learned from 2015-2016:
(1) Learn as fast as you can, then move on. Repetition isn’t progression.
(2) Distract me once, shame on you. Distract me twice? Well…
(3) Homo Sapiens on Planet Earth need a New Narrative.

When people apply these lessons to life, they make very different choices. How will I engage on Facebook? Will my neighbors believe what they read on the front page of the newspaper, while sucking down their morning coffee? Are the voices flowing through my car speakers, as I commute to and from work each day, worth listening to? When I tell my child what matters in life, what will I say? More importantly, what will I believe myself, and why?

Without even thinking about it, the average Homo sapiens tends to surround him or herself with the thoughts and opinions of others, who we then agree with or rail against, only to do it all over again the next day and the next and so on.

We don’t need all of that. I certainly don’t. And our children? Gah! Absolutely not. What we all need is fresh, creative ideas that offer a balance between learning from the past & imagining a truly new and better way of living together on this planet.

The Old Narrative balances precariously upon a foundation of fear, scarcity as normal, and war over resources as inevitable. This Old Narrative has driven us to great feats and hideous horrors, for close to 10,000 years, but it is not our natural state of being. Despite the ugliness that gets so much attention, our better side is far more prevalent. Why do we ignore the good? Because the only way you can convince 99% of the population to maintain a system that creates insane wealth & power for 1% of the population…is through that Old Narrative. Once people realize there is enough for everyone, and that the vast majority of us would be much happier working side by side (rather than competing against one another), our motivation to maintain the status quo fades away.

Just imagine what Homo sapiens could have done, with the cheapest and best source of energy our planet had to offer us (fossil fuels), if we had worked together for the last 200 years? I’m not bothered that we discovered coal and oil and natural gas. I’m super sad that we squandered it! What an incredible waste of a beautiful opportunity…but, that opportunity isn’t totally gone. We still have an insane amount of technology, raw resources, and HUMAN INGENUITY available for our use.

So, let’s use it. Let’s dream the big dream. Let’s see the Old Narrative for the failed collection of social constructs that it is, existing only in our shared imaginations, and let’s use that powerful imagination for what it’s meant for! Dreaming up a future worth living.

Can we? Yes. Absolutely. We can and we will. Here’s why.

Homo sapiens are primarily altruistic, communal beings. Our dark side only comes out under duress or in times of fear. In the Old Narrative, “Fear is King,” making us vulnerable to personality politics, justifying inhumane treatment of other sentient beings, and promoting the ridiculous ideas that money equals worth and there is no option other than sacrificing those who are “other than ourselves.”

When Homo sapiens feel safe and secure, we see happy faces, parents cuddling with children, drivers stopping for ducklings in the road, grandmothers knitting sweaters for their grandchildren, husbands loving their wives, people working together on mutually beneficial projects, and so on. When Homo sapiens face a challenge – and if they trust one another – they will solve that problem by working together. Every time.

We only turn on one another when we lack trust, and that is functionally the definition of fear = lack of trust. If someone is encouraging you to distrust other people, they are promoting the Old Narrative. Xenophobic? Old Narrative. COPS television show? Old Narrative. News footage painting an entire nation, race or religious group as scary, violent or anti-us? Old Narrative. Welfare moms robbing us blind and poor black children as super-predators? Old Narrative. Economic “experts” insisting that “competition is the only way” to have a thriving society? Old Narrative.

Resources are scarce, it’s natural to have an economic hierarchy, so get out there and make sure the you end up on the top of the heap? Old Flippin’ Narrative!

Only in the realm of human imagination, could Homo sapiens believe that this abundant, robust and regenerative planet doesn’t have “enough.” On Earth today, scarcity is almost always a manufactured condition, designed to give those who claim to “have the scarce resource” a leg up on those who mistakenly believe “they must fight one another for a piece of the pie.”

The Bernie Sanders movement is all about changing the narrative. Asking the heretical question, “What if that isn’t true?” What if, by working together, life will get better for all of us? What if, faith and brotherly love really are the keys to Peace on Earth?

It’s going to take a lot of re-thinking for Homo sapiens across the planet to accept that most of what we believe to be real is just a time-honored collection of social constructs existing within our collective imagination. It’s going to take LESS effort for Millennials to see through the veil, behind the curtain, through the fog, and so on…while the elderly seem to vacillate between wistfully remembering how their grandparents lived and their ego-preserving desire to believe that buying into the Old Narrative was a good idea.

But the children, and teens? They are the most fluid and flexible of us all! So, please, dear parents, teachers, coaches & mentors. Be careful what you teach them. LOOK at the global culture of European Imperialism (a cultural trait inherited by the USA) and see the death, decay and damage our Old Narrative has caused. Remember that we reap what we sow, and consider carefully what seeds you encourage the young to plant.

Humans competing against one another, is a dystopian theme. Books and popular Hollywood movies always frame dystopian stories as being “in the future,” but we have been living a dystopian reality for centuries.

It is time to stop. Reverse course. Re-evaluate. Re-value. Re-think.
It is time for a New Narrative.