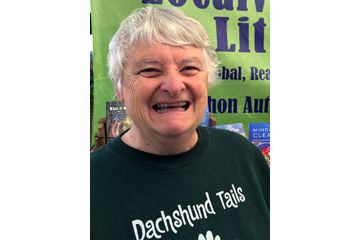 Dr. Marilyn Cochran Mosley is a retired school psychologist. Prior to that, she has been a counselor at the college level both at the University of Washington and at Grinnell College (Iowa).

She began working in the public school system in Washington in 1973 and later traveling as an itinerant to remote communities in Alaska for 20 years. Married in 1975 to O.A. (Bob) Mosley until he passed away in 1995, they adopted two pre-teenage children from Peru in 1986.

Growing up in the Pacific Northwest Marilyn has traveled extensively throughout the world, including a trip in single-engine 1948 Bonanza between London, England and Brisbane, Australia in World Vintage Air Rally. She lives with her eight dachshunds on Vashon Island. She has written nine books about dachshunds (Dachshund Tails series), Adoption in Peru, senior editor of Alaskan Ferry Tales for Children.
www.cochranmosley.net