How Primary System is Failing Democrats! 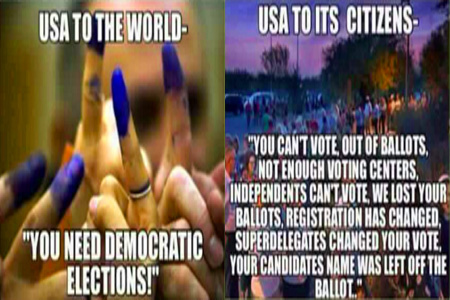 Some of you may think I’m simply a die-hard Bernie Fan who doesn’t know when to give up; but I’m not. I’m a realist. AND, if you’re feeling anxious…GOOD.
That means you are still awake! Thank Goodness!
NOW…here’s what you need to explain to yourself, your friends, your family and – most importantly – to your DEMOCRATIC PARTY REPRESENTATIVES!
Pop Quiz: “What is the purpose of the Democratic Primary?”
A: “To choose the best candidate.”
Pop Quiz: “What defines the best candidate?”
A: “The person who (1) best represents the highest goals of the Democratic Party and the person who (2) is most likely to win in the National Election.”
I PROMISE YOU: THIS PERSON IS NOT HILLARY CLINTON.
AND HERE’S WHY…
For decades, the members of the Democratic Party could trust that whomever “won” during the Primary was the best candidate. However, this is NO LONGER TRUE because, if you are a Democrat or a Republican…you are in the minority.
FACT CHECK:
Democrats = roughly 31% of the population
Republicans = roughly 23% of the population
Independents = roughly 43% of the population
THINK ABOUT IT FOR A MINUTE. Yes…this is why Bernie does very well (wins) in states that allow everyone to vote.
What this means is simple.
Politics “as usual” won’t work in 2016.
And, this is probably a good thing, because politics “as usual” pretty much sucks!
For example, I just finished compiling a table tracking all of the states, who won the primary, by how many percentage points, and then…how many delegates did they walk away with?
Believe it or not, in three (3) states…Bernie actually WON the race, with a higher number of votes or caucus-goers showing up for him. YET, somehow, Hillary got more delegates! How does that happen?
Here they are:
Wyoming — Bernie wins by 11.4% — Delegates: (7B) and (11H)
Michigan — Bernie wins by 1.5% — Delegates: (67B) and (74H)
Rhode Is. — Bernie wins by 11% — Delegates: (13B) and (20H)
How can you WIN a state and have the LOSER walk away with more delegates? And no, this NEVER happens the other way around. When Hillary wins, she wins. And, this is just the tip of the iceberg.
NOW CONSIDER THIS:
In Pennsylvania, Hillary’s 12% win = almost exactly double the delegates as Bernie (112H & 59B)
In Rhode Island, Bernie’s 11% win = Hillary earning almost double the delegates as Bernie (13B & 20H)
**Yes, you read that correctly!**
http://www.politico.com/2016-election/results/map/president
THIS is politics as usual, folks. And, as you can see, it doesn’t work! If all of the discrepancies and unequal math were fixed — we’d be seeing very, very, very different primary results today! In fact, tomorrow (when I’m not falling asleep at the keyboard) I will run these numbers to find what strange inconsistencies they contain.
Yes, I imagine there’s an “explanation” about these oddities and I’m sure it will be blamed upon the states having different rules (blah, blah, blah)…but the fact is, this is the WORST WAY to choose a candidate to run for the important office of President of the United States of America.
Which brings us back to the REASON why I still believe Bernie Sanders is the candidate which the Democratic Party will choose as its Presidential Nominee.
QUITE SIMPLY – BERNIE SANDERS IS OUR BEST OPTION.
Come back again soon, as I’ll be adding some more of my number crunching patterns and oddities as soon as I can…