My Answer to “Lesser of Two Evils” Proponents 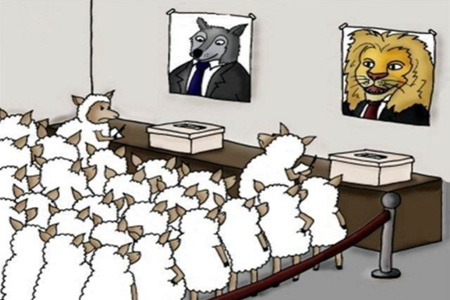 To the man who was flogging individuals with his rationale for why a vote “For Hillary” was the best option, because if you don’t, then you are voting “For Trump.” You know…the “Lesser of Two Evils” argument?

Here is my reply:

The problems, _______________, is that Trump is a master manipulator (who is probably a Clinton Troll – if you watch his strategic moves vs his rhetoric, there’s a pretty convincing argument for this viewpoint)….and so is Clinton. They both cater to the same economic elite (of which they are members), and while they present differing caricatures (one with a liberal appeal and one with a conservative flavor)…they are two sides of the SAME coin.

I did extra research into Hillary Clinton, in order to determine whether I could justify hiring her as the PRESIDENT of the United States of America (a terrifyingly powerful position, when you really think about it)…and I simply found more reasons to distrust her entirely. The woman is a nightmare. And, if you don’t want to know this because she’s your “back-up” vote…then, don’t even think of pushing others to vote the same when you’re not just holding your nose but are also closing your eyes and ears.

There is an adage from the native tribes of N. America that runs something like this:  “Some people crave power & others respect power. The first, should never have it.”

Those mountains were NOT the enemy.

They were not the whites or the British. NO.

The greatest obstacles of ALL social movements is the argument you just offered up.

The FEAR of a greater danger is that which causes common people to become weak-willed enough to ACCEPT the handouts they are offered (by their enemy) in the form of the “Lesser of Two Evils.”

In the short term, your point is valid. That’s WHY it has such a degrading effect on the heart and soul of our world’s greatest social movement — the 99% seeking to regain directorial control from the elite class which has gone nearly mad with greed. Ours is not a mutiny. Ours is a restoration of sanity for the sake of our collective survival…only because of us, might the 1% also live to see another century.

Remember…the Oligarchy understand the power of this tool FAR MORE than regular Americans. The Oligarchical Powers of America (which Bernie has been warning us about) are steeped in successful social manipulation. Their class is (and historically always has been) willing to do anything to maintain power.

What is the point of a Democratic Party that breaks glass ceilings, pop-pop-pop, one after another, if the “Minority Representative Candidates” are deeply immoral and/or pretty figureheads who quickly and amiably give the “powers that be” exactly what they want?

A person’s vote in America is their own. It is a power which (voter fraud aside) cannot be utterly manipulated and controlled by the Oligarchy. It is, as it were, their Achilles Heel. A weakness which they have been working hard to alleviate through voter disenfranchisement, corporate media control, and Super Delegates.

Rather than play into their narrative, I will firmly encourage bravery and commitment to the Political (R)Evolution. I will endeavor to never insist that I have THE answer and that others are “idiots or fools” if they do not vote this or that way…nor will I blame any person (or any group of people) within the 99% for the ultimate outcome. Such extraordinary rudeness is beyond inappropriate, even as it becomes increasingly common…one more example of the Oligarchy’s success at using THIS ULTIMATE WEDGE ISSUE to divide the people they hope to continue conquering.

To this argument, I say: “If you are being told to vote out of fear, then you are being herded. The question is, who is herding you?”

I encourage all within the commons to ENDLESSLY ENCOURAGE TOGETHERNESS. If you can, hold yourself back from the temptation to divide us further, through your fear. Can we not do this? The followers of MLK did this, in the face of fire hoses and police dogs…in the face of lynching and rape…surely, we CAN be as brave, once again? In MLK’s memory, if nothing else, as he ALSO began the fight for an all-inclusive worker’s revolution!

The Political Theatre and the deviousness of the powers behind this terrible ordeal we find ourselves in is deeply unsettling and a horribly uncomfortable state of affairs…YES!

As such, I cannot personally encourage anyone to accept more of the same by voting “in line” with the will of the Oligarchy. That said, your vote is your own. I hope you spend it (and the rest of your life) bravely.