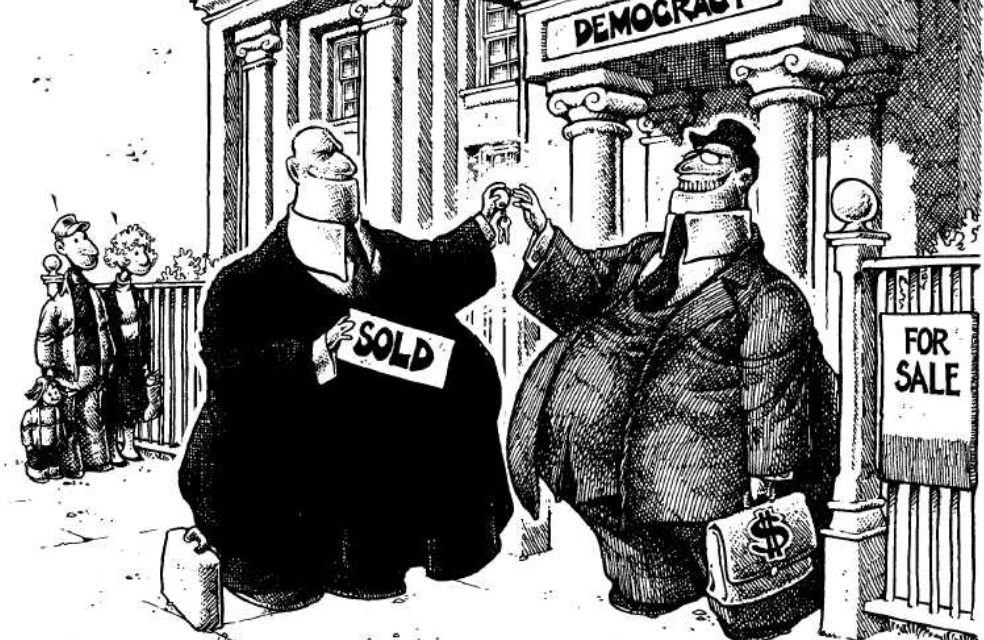 If you are a #DemEnter enthusiast, I’m going to ask you to hang tight. I fully support efforts to reclaim control of both Political Party Machines, from the ground up. However, for the many people who seem to be waiting around for the Establishment Democrats to produce a quality candidate…I want to say, “Please stop hoping for this.” The Establishment Democratic Party will not help America in 2018 or 2020.

I think you already know this. But…just in case you doubt your instincts, let’s explore why.

The current situation on Earth is not an accident or random event. We are here by design. Perhaps the “end result” was unintended. Even undesired. Doesn’t matter. Our problems are the direct result of an economic system that is held in place by its winners.

Quick Quiz:  How old do you have to be, to have been capable of voting for Ronald Reagan as President of the United States of America?
Answer:  51

Think about that for a minute. For every American under the age of 50, Ronald Reagan is a childhood memory. The President we were taught to see as either a “Republican Hero,” or the man who worked in concert with Margaret Thatcher to destroy the political and economic gains achieved by workers earlier in the century. Well, let me present him in a new light.

Ronald Reagan was initially a liberal Democrat and union organizer, who – as he gained economic success and entered into the wealth class – became the Public Face of a new phase of American Government known as: Political Capitalism.

In short, this is what we live with now. Call it what you will (corruption, corporatocracy, oligarchy), it all adds up to the same thing. Those with the gold are making the rules…and they choose rules that benefit themselves in the short run. Just look at the current situation! Americans are dying of leptospirosis in Puerto Rico (from drinking contaminated water – this disease typically effects dogs that drink water contaminated with animal feces or urine) and our President is talking about Eliminating the Estate Tax. Yeah…we aren’t exactly being ruled by folks with our interests at heart, are we?

But, that’s the Republicans, you say? The Democrats are better. Really?

Consider who has been in control since the Reagan Era. The common narrative is that the good Democrats have been fighting an uphill battle against increasingly powerful (and bad) Republicans. But, let me ask you a question. Do you know how much control each party has had in Congress over the past 40 years? More on that later. For now, I posit that our losses are the result of the economic and political elite combining together into one homogenous group with largely shared interests.

This is the big secret that’s being kept. The ultimate truth that must be obfuscated. Just imagine…if the American people knew that there was now only ONE party in America? Well, then we’d react. We’d protest. We’d do something…that might upset the system.

Which is why these two “sock puppet” parties use wedge issues to present themselves to the public as different. So long as the American system of Political Capitalism is kept hidden behind the proverbial curtain…the public does not protest. We just sit, breathless, waiting for our trusted political parties to produce a champion we can cheer for, campaign for, believe in, donate to and vote for! We’re practically drooling.

When maintaining your status as a “winner” depends upon the continuation of a brutal, predatory economic & resource allocation system that is rapidly returning us to a near-feudal society in a crumbling ecological disaster zone, you need a cover story that’s believable and you need to make sure everyone learns that story very, very well. That’s the only way you can avoid becoming the rightful target of everyone’s ire. (Hush, hush. Just ignore the fact that MOST members of congress are millionaires, with no true understanding or shared experiences with the vast majority of the population they are elected by…let’s just ignore that eensy-teensy fact.)

Back to the question of “who has been in control in Washington D.C.” for the past few decades. As in, which party has more long-term members? This report breaks it down for you. What you’ll see is that Democrats have held more seats in Congress, for more decades, than Republicans. So, how is it that we have incurred HUGE LOSSES when it comes to social nets, worker rights, consumer protections, citizen benefits, and fundamental freedoms (like access to birth control, our right to choose, and public funds for education)?

While promoting themselves as champions of human rights on individual popular issues (such as Gay Marriage), our fundamental and most basic rights to unionize, control our fertility, engage in the political system, blow the whistle, receive a fair trial, and be protected from government intrusion into our lives (NSA and Homeland Security ring any bells?)…are disappearing or already gone…with the full support of both parties. Oh, I meant to say, the one party that runs our country.

And most of the rest of the countries in the world. Typically, I refer to the current holders of power on Earth as the IOWC, which stands for:
International
Oligarchical
Wealth
Class

While it is popular to bewail the incredibly regressive and bigoted behavior of Donald Trump, everyone who has been tracking the details of Barack Obama’s eight years in office is equally distraught. President Obama has not been the friend to Human Rights that the party would like you to believe, treating them “as a secondary interest — nice to support when the cost was not too high,” according to, Kenneth Roth, Executive Director of Human Rights Watch.

Likewise, Bill Clinton was not the friend to African Americans that he was believed to be, as illustrated brilliantly by Michelle Alexander in her book, The New Jim Crow. And Hillary Clinton was arguably not a true friend to poor people or women, given that she sat on the Wal-Mart board for almost eight years, while their aggressive tactics targeted and devastated middle America with wanton force and manipulation. Learn more here.

As Hema Swaminathan, of the International Center for Research on Women, states: “The interest in Wal-Mart is not surprising as it has no equal among big box retailers. With total revenues of $256 billion in 2003, Wal-Mart Stores Inc. is the largest corporation in the world.” As such, it’s no surprise that a rising political dynasty would seek to form a strong alliance.

YET. Despite the evidence, Americans seem so scared of discovering that their entire political system is owned and controlled by corporate interests, that they desperately cling to the belief that the Establishment Democratic Party is there to help them. While this makes sense, emotionally, we can not continue to be swayed by our base, reptilian brain. We must raise our cognitive capacity for sleuthing, cautious skepticism, personal responsibility for doing thorough research prior to forming an opinion and so on. The proffered narratives, stories, myths and lies are already killing us, and, like the proverbial snowball, this faulty system is rapidly growing into a planetary sized wrecking ball.

TRUTH OVER COMFORT MUST BECOME THE NORM.

During the 2016 Presidential Election, six (6) corporations dominated our national, state and local media. These storytelling & distraction monopolies (that Americans turn to for their daily dose of Kool-Aid) control 90% of what is available on television screens, computer monitors, newspapers, magazines and radio. Keep in mind, there is no Red/Blue divide between them. Take a look at the examples below, and know that the Corp Media Message (CMM) is whatever our Political Capitalism system wants it to be.

ONE SYSTEM. ONE NARRATIVE. ONE WORLD VIEW.

And so, I ask all of you to BE LIKE DOROTHY. She didn’t give up. She didn’t whine and whimper. She didn’t wait around for someone else to get things done. She joined with humble & loyal companions, faced hardships and danger, left her comfort zone, and kept going…never giving up…until she & her friends uncovered the truth, exposed the liars and reclaimed their rightful access to power.