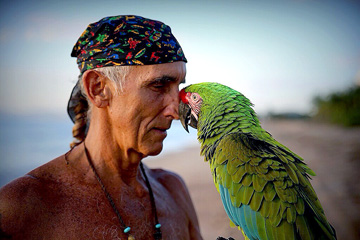 Born in Missouri in 1946, Four Arrows is Irish, Tsalagi and a made relative of the Oglala Lakota Medicine Horse Tiospaye. Currently a professor at Fielding Graduate University, he served as Director of Education at Oglala Lakota College on the Pine Ridge Reservation where he fulfilled his Sun Dance Vows.  After leaving the U.S. Marine Corps, a variety of adventures brought him to live or work closely among the Raramuri, Kunkaak, Navajo as well. With doctoral degrees in Health Psychology and in Curriculum and Instruction (with a cognate in Indigenous worldview), he has authored twenty books and numerous invited chapters and articles. While a tenured professor at Northern Arizona University, he co-founded a Veterans for Peace chapter. In 2004 he was awarded the Martin Springer Institute Award for Moral Courage and in 2010 AERO named him as one of “27 visionaries in education” for their text Turning Points. In 2017 his book, Teaching Truly: A Curriculum to Indigenize Mainstream Education, was listed as one of 20 top books for progressive education by the Chicago Wisdom Project. https://chicagowisdomproject.org/books/

Among his hobbies he plays handball and stand-up paddle board surfs. He was first alternate for the U.S. Equestrian Endurance team for the 1996 Olympics (using a mustang that he captured and trained), and is a world champion “old time piano player.”