The World on a Bus 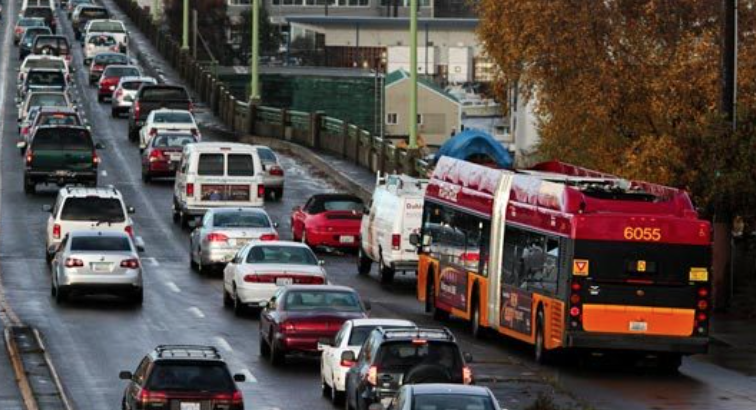 As I clamor aboard the new red & white “D” Route, the crowded aisle catches me off-guard.  It is, after all, a Saturday afternoon.  Settling myself beside one of the few metal poles, and tucking my bags between my legs, I encounter an affable bus rider of middle years.  Maybe it is the sunlight – a rare, rarity here in the early Spring Northwest.  Whatever the reason, he soon matches my instinctual chattiness with an easy cheeriness of his own, as we roll and rock our way down the thoroughfare.  Instantly, any impression of inconvenience – or lack, as I am without vehicular independence at the moment – evaporates like this morning’s cloud bank.

Next stop.  A woman of obviously painful history enters our earthbound shuttle, her sweet doggie beside her.  “They let dogs on the bus?”  I comment, startled and pleased.  “Yes.”  Says the man, his wide, dark lips softening into another of his many easy smiles.  And so, we trundle along, the ambiance of temporary neighborliness infecting us all.  The dog helps, I’m sure, and I’m glad of it.  Roxy’s owner – short, open, kind – shares willingly.  “I used to be a cutter.  But, since I got Roxy here…well, if I start bleedin’ or have to go to the hospital, who’s goin’ to take care of ‘er?”  I don’t say anything about the large scar that runs along her neck, just above the jugular.  Instead, I nod.  Smile.  Agree – yes, rent is too high here; and my often-independent heart begins to soar on the unexpected wings of public transportation.  Being engulfed in our varied humanity is oh-so nourishing.  The ferry.  The tram.  The subway.  The whatever that carries us from place to place, within its micro-orgasmic bowels…thrust up against each other like so many bits and pieces of a good meal.

Next stop.  My cheery comrade nods goodbye, replaced by youth, beauty, and love.  The couple, headed to Bainbridge for an evening of good eats and good memory (“We were engaged there, you know…”) remain standing.  I sit; at the urging of graying, black curls, an observant demeanor, and kind eyes.  Like I were her granddaughter; 3rd generation to her 1st.  China or Japan?  Korea or Laos?  I don’t know.  It doesn’t matter.  She’s just a woman who understands tired feet.

Next stop, and we watch; shut out by silence and darkness.  Two men, joined by flickering fingers and listening hands, take the seat across from me.  The button reads:  I am deaf and blind.  “Do you need somewhere to put down your bags?”  I ask.  No answer.  I watch surreptitiously, a politeness for which there is no need, as we flow down the slight hill of 2nd Ave.

Next stop, and well-dressed with Japanese features, city fashion, and pocketfuls of high-tech fill the aisle between us; blocking out the typically invisible.  His arm, under the rolled-up cuff is so…fair.  Bluish veins show dimly under the alabaster whiteness of smooth, young skin.  Making me wonder; what is white in America?  Not color.  Assuredly not that.

Next stop, and the world pours in through the mechanized doors.  The middle east is here, perfectly browned by birth and sun; lash-rimmed, beautiful eyes, confidence and humor.  American white follows…whatever that is.  “I used to go to school on Vashon.”  She remarks, sharing painted toenails with Japan and Persia.  “They didn’t know where anything was!  They’d ask me, where’s Green Lake?”   Laughter rises up.  Joins single-handed texting.  Finger-slapping.  Snoozing breaths.  Out the window gazes.  The twang of a guitar as we hit a bump.  Sandals, sneakers, heels, boots.  Make-up, sweat, a touch of eyeliner…and the pronounced presence of nothing.  Jostled; complete strangers who will likely never meet again bump and look; smile and…connect.

Outside, I gaze into the robot-like faces of the independent.  Their jaws, as they pass; tight.  Eyes focused on the dead and dying road; not on the child in the back or the spouse by their side.  Tense and empty, they roll by…thinking theirs is the better lot.  It hurts to watch.  To realize…so often, that is me.  Grateful, I turn away.  Turn inward.  Smile and fantasize.

What if I never had to drive a car again?  How lucky I would be…