The Privilege of a Peaceful Thanksgiving 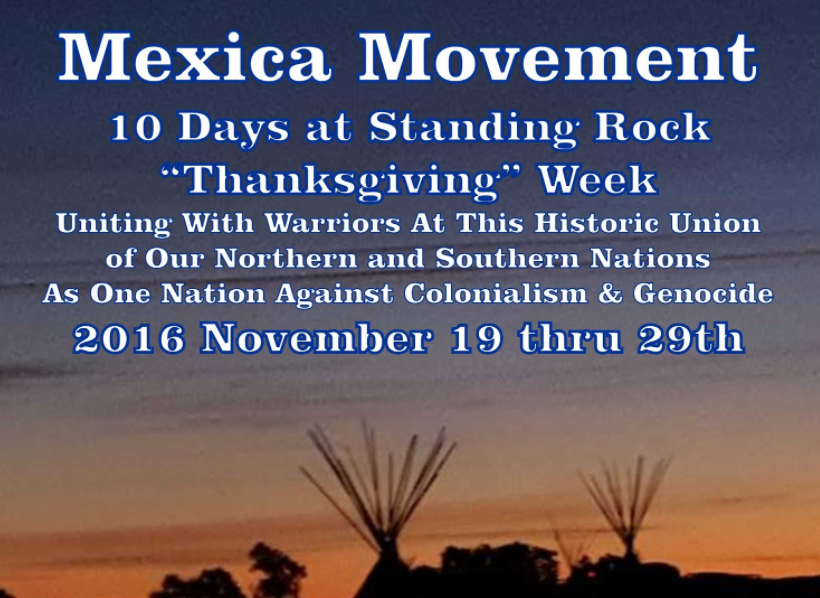 I understand if you want to ban all political conversations and enjoy your Americana Thanksgiving Holiday. I just don’t agree that acting (for this day) as if everything is normal in the world is the right thing to do.
Maybe you’re wanting a breather? So are the kids in toxic, industrial communities who can’t breath because 1 in 2 has severe asthma.
Maybe you are tired of the stress and need a break? So do the millions upon millions of families in America who can’t afford a feast, or the heating bill, or their rent, or dental care for their elderly parents or new shoes for their kids. Why do WE, the comfortable and the upper crust, get to enjoy a break…when they don’t?
Maybe you are traumatized by the events at Standing Rock and you just don’t want to hear about it, on this one special day? Well, that’s your privilege speaking. Right?
Don’t feel bad if you are overwhelmed and need to give yourself some self-care. But, do consider that you ARE PRIVILEGED if you have the option to create a delicious meal, sit in a warm home surrounded by healthy friends and family…and AVOID the discomfort.
So, here’s a question for my fellow Americans:
“How can I turn this natural gathering of people into a force for good?”
SUGGESTIONS:
(1) Ask everyone at your Thanksgiving Party to give a donation of money that can be carefully sent directly to the Standing Rock Camp (not those GoFundMe sites that may not be legit).
(2) Bring postcards to your Thanksgiving Party, so that everyone has a chance to join the Postcard Avalanche to Denounce Bannon (with stamps, so we can mail them on the 28th).
Go To: facebook.com/events/235432800204102/
(3) Create a suggestion bowl, with paper strips and pencils, and ask guests to write down two things: What I will do to make the world a better place in 2017, and…what I hope other people will do in 2017. THEN, before you serve dessert, read these anonymous ideas out-loud!
Still need a break? Of course you do! Dang…I sure do! So, join me in planning to take the day after Thanksgiving as your “rest and recuperate” day! Boycott #BlackFriday, sleep in, recharge your batteries, go for a long hike…Hell, get your nails done! Whatever you need to do, to prepare yourself to return to the real world as a purposeful force for good!
Just, please…reconsider the idea of “removing the discomfort of reality” from your Thanksgiving holiday. Now is a time to “welcome the struggles of our fellow man and woman and child” into our personal experience. Indeed, it is not until a problem becomes personal, that most of us become willing to do something about it.

The Standing Rock Medic & Healer Council responded to a mass casualty incident that began at 6pm yesterday evening. Approximately 300 injuries were identified, triaged, assessed and treated by our physicians, nurses, paramedics and integrative healers working in collaboration with local emergency response. These 300 injuries were the direct result of excessive force by police over the course of 10 hours. At least 26 seriously injured people had to be evacuated by ambulance to 3 area hospitals.

Police continuously assaulted demonstrators with up to three water cannons for the first 7 hours of this incident in subfreezing temperatures dipping to 22F (C) causing hypothermia in the majority of patients treated. Chemical weapons in the form of pepper spray and tear gas were also used extensively, requiring chemical decontamination for nearly all patients treated and severe reactions in many. Projectiles in the form of tear gas canisters, rubber bullets, and concussion grenades led to numerous blunt force traumas including head wounds, lacerations, serious orthopedic injuries, eye trauma, and internal bleeding.

Every emergency medical unit from the Standing Rock Sioux reservation responded to the incident and additional ambulances were sent from Cheyenne River Sioux tribe (South Dakota), Kidder County, and Morton County. 3 seriously injured patients were transported directly by ambulance from the scene and another 23 patients were transported by ambulance after initial assessment and treatment in camp. Injuries from the mass casualty incident include: