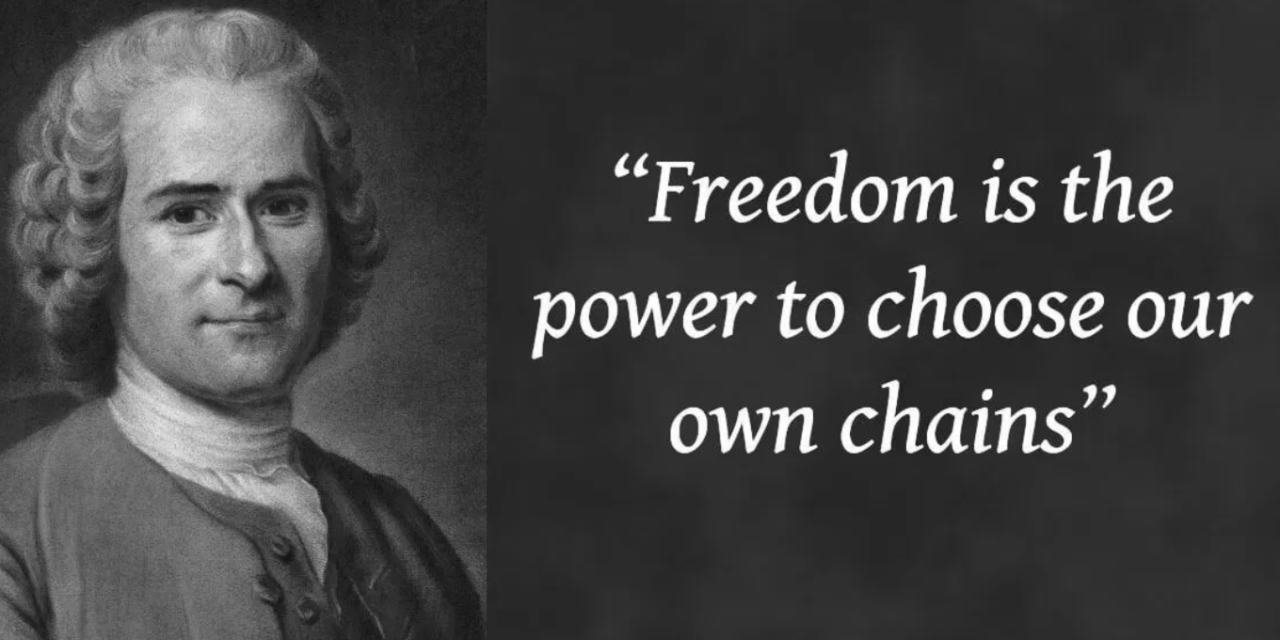 The stated aim of The Social Contract is considered to be: “to determine whether there can be a legitimate political authority.” This is a laudable question, given that many forms of governance seem to place people in a state far worse than they would otherwise encounter. What then, is the good, of an organized society, if you lose more than you gain?

Rousseau states, “Let us then admit that force does not create right, and that we are obliged to obey only legitimate powers.” Begging the terrible question of our day and all days, “what powers are legitimate?” The answer is not easy to arrive at, except to say that during the past century, the world has generally come to agree with Rousseau, in that, “the ability to coerce is not a legitimate power, and there is no rightful duty to submit to it.”

Meaning, your capacity for bullying does not equal my requirement to obey.

All of which is fine and good, if I am willing to live with the bullying that will follow, should my chosen society fail to protect individuals from such illegitimate leadership. But, by being born here, there, anywhere…did I choose my society? Or was it mere accident?

Rousseau goes on to say this:
“In this desired social contract, everyone will be free because they all forfeit the same number of rights and impose the same duties on all.” Rousseau explains the absurdity of a man surrendering his freedom for slavery; saying, “the participants must have a right to choose the laws under which they live.”

“…must have a right to choose…“

To my eye, Rousseau is arguing that freedom does not mean you forfeit nothing. Freedom is not the absence of losses of liberty, nor is it a life without obligation to others. Freedom is one thing and one thing only: our inalienable right to choose which laws to live under. Which society to join, if any. Which country to offer our partial surrender and promised duties.

This is arguably codified by the foremost goals of our own (American) constitution, with these treasured words: “We hold these truths to be self–evident, that all men are created equal, that they are endowed, by their Creator, with certain unalienable Rights, that among these are Life, Liberty, and the pursuit of Happiness.

These rights, as so written, and naturally or divinely promised, speak of our right to make the ultimate choice of which society to join, which sacrifices to accept, which obligations to take on. Each for ourselves. And to do this, we must have freedom of movement.

I have never heard a better argument for open borders in my life. From a purely pragmatic perspective, should borders open, and should humans be free to move about as they wish….would not the most successful and desirable “social contracts” naturally attract more people? And those with faulty or poorly contracts, lose them?

We know this would happen, and we know that power moves as the people move. Proof lies in the past century, as The Soviet Union, Red China and North Korea demonstrate(d) perfectly by preventing their captive populations from leaving.

Therefore, if we wish to see social contracts around the world improve, maybe we need only free people up to choose for themselves? Could it be as easy as that? Perhaps the solution to the issue of “immigration” is to simply step aside, open the gates, and let the natural selection of quality social contracts over crappy ones tip the global balance toward a world with truly valuable Social Contracts.

It’s worth consideration, at the very least.