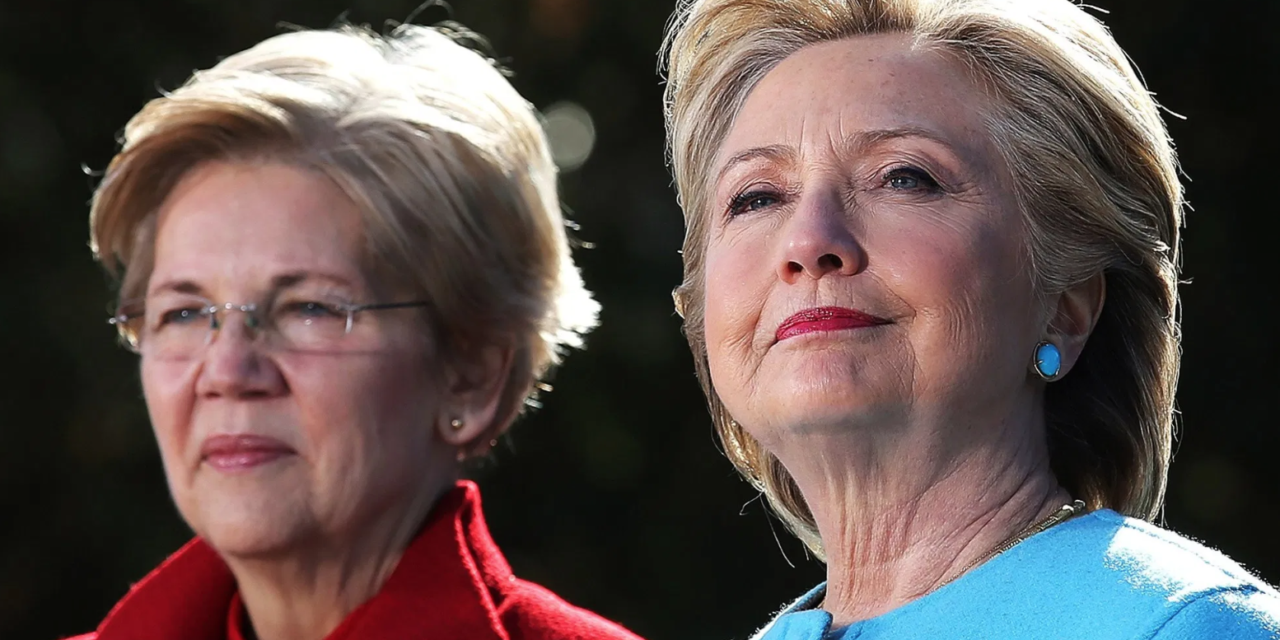 As Jim Geraghty writes, “if you’re trying to figure out which Democratic presidential candidate would have the worst shot of beating Trump, one way to look at it is to ask, out of the entire 2020 field, which candidate reminds you of Hillary Clinton the most?”

Jim’s article gave me serious pause for thought, but only because of a video that I’d seen earlier in the day (link in the next paragraph). Naturally, you can say whatever you want, when you run for office. But, in the end, it’ll be the whole package – including what you really stand for – that matters. And we can’t rely on spoon-fed, in-your-face, endless mainstream media propaganda. To truly know a candidate, you’ve got to go digging. Open-minded digging. Listening to those who like and dislike the candidates you love or hate. Researching the dark side of a candidate’s past (see here), rather than pretending they’re all roses and buttercups & looking for the good in a candidate who drives you bananas and gives you hives.

Critical thinking. Objectivity. Slow to judge. Check your impulses. Challenge yourself. And so on.

For these reasons, I have kept the door open for Elizabeth Warren. Until today. And this video is what put me over the edge. Not the peanut gallery of commentators, mind you, but Elizabeth’s own ideas, expressed in her own words.

Elizabeth Warren does a good job of acting like a female version of Bernie Sanders, but she’s really the DNC’s gender-friendly equivalent of Joe Biden. Another proven establishment player. Complete with the requisite #MeToo fervor genitalia, and the ability to parrot the popular ideas of Bernie Sanders. Elizabeth Warren is just another DNC faux revolutionary.

Does she know it? I’m not sure, but her (and Joe Biden’s) role is clear. Distract the American People and STOP the movement that began with the Bernie Sanders candidacy in 2015.

If you like Elizabeth Warren, that’s okay. She’s not a bad person. But, in order to vote effectively? In order to self-govern? We MUST be honest with ourselves. And, while it’s disappointing, Elizabeth is not being vague. She is intentionally and openly approaching the U.S. Presidential General Election with the same attitude that Hillary Clinton approached the 2015-16 primary. “We must win! Ethics, be damned.”

The ends, my dear women, do not justify the means. And, this terrible addiction to “sold out realism as an excuse for playing dirty?” It’s the same old, neo-liberal Establishment Dem playbook, on repeat, ad nauseam.

In the above referenced video, Elizabeth Warren explains why we “need” to arrive at the political fight of 2020 “using” the same corrupt, immoral money schemes as the existing corruption-based system. She essentially demands that we prepare to “match” the Koch Brothers/Trump cabal, dirty dollar for dirty dollar, a la Pelosi, who recently said, “And money — there’s nothing quite as eloquent as a bank statement to show strength.”

Pelosi, as the leader of the Democratic Party, is not alone in worshipping the power of money. So, it’s no surprise that Elizabeth Warren rants against Big Bank Corruption on the one hand, while publicly declaring her willingness – nay, absolute commitment – to accept their money? I suppose a person could reasonably imagine that she plans to climb out of that bed (once she’s in the White House) and lead the nation, free from economic puppet strings. But, even she’s not saying that. I’m sorry, but that’s just your hopeful, bleeding heart running away with you.

Because, that is a bed you never climb out of.

Doesn’t happen.
Selling out is permanent.
Elizabeth is already in power due to corporate $$.
So, why would we expect her to be a free agent?
She isn’t, she never has been, and she won’t ever be.
Opportunity, missed.

Which reminds me of something else I was willing to let go of. In 2015-2016, Elizabeth Warren played with the idea of supporting Bernie Sanders’ candidacy, right? But, she didn’t. She chose the safe route. The familiar, status quo option. The neo-liberal Establishment Dem path forward; proudly and loudly supporting Hillary Clinton, before the DNC nomination, on June 9th, 2016 during the Rachel Maddow show: “I just want to be sure I get this on the table, and get this on the table early: Hillary Clinton won. And she won because she’s a fighter, she’s out there, she’s tough.”

While we’re discussing the June 7th Primary, let’s look at California. Even overlooking the debacle of that election, and the fact that it took days to wade through the corrupted muck, or that Elizabeth Warren chose to throw her support for Hillary a mere 48 hours after the June 7th primaries; there’s more to see.

Let’s look at the results themselves.

Take a breath, and see what you’re looking at. The entire state, within the Republican Primary, went to Trump. Every. Single. County.

The Democratic Primary, however, shows something very different. There’s a clear, regional divide. Now, take a minute. What do you make of this?

Here’s what I see:
In all of the more conservative counties, Democratic Voters supported Sanders, with Hillary taking a few extra percentage points in the truly liberal regions of the state.

And, here’s what that means:
Bernie Sanders appealed to not just deep, liberal democrats. He also drew the support of those who are on the conservative edge of the Democratic Party. Rural, lower income Democrats, from regions that are more heavily Republican, preferred Bernie, as well. And they have Republican neighbors, friends, and family members.

And, the same is true when you compare Bernie to Elizabeth Warren. On 9/11/19, in a new Franklin Pierce University-Boston Herald survey, we see that “29 percent of likely Democratic voters in the first-in-the-nation primary state said they support the Vermont senator, while 21 percent are backing Biden. Elizabeth Warren received 17 percent.” ~ Politico

Massachusetts and Vermont are direct neighbors with New Hampshire. What do they know, that we don’t? Why would Bernie Sanders be 12 points ahead of their other close neighbor, Elizabeth Warren? This isn’t an accident, and we should pay attention, because it speaks to the realness of the pulse of the nation and this, I believe, is a reflection of each candidate’s conviction.

How many of us would be willing to hire a personal trainer who was carrying an extra 150 pounds? Or a life coach who was depressed and homeless? Can a chain smoker inspire a group of teens to give up cigarettes? Practice what you preach. Or go home.

Which brings us back to the greatest issue of all. How do we convince card-carrying Republicans to vote for a Democratic candidate? Simple. We give them a candidate who speaks honestly to the issues that matter to them.

Never forget how many Republicans were tempted to vote Democratic in the General Election – if it was Bernie. He is and has been beloved by Independents, Democrats AND Republicans throughout Vermont for decades. And this is why the Dems are running scared.

While media portrays our nation as two clubs, at polar opposites of the ideological spectrum, the TRUTH is this: we exist on a Bell Curve. MOST of us are not on either extreme. We live in the middle.

The people of the “middle” are truly the salt of the earth: “a person or group of people of great kindness, reliability, or honesty.” Middle class people need one another. They lean on each other. They have each others backs. They care about what truly matters. One another. They are the GOLD of our nation, and they all want the same thing: an elected representative they can trust.

Elizabeth Warren is, quite simply, an older woman who doubts the younger generations’ commitment to NEW ways of living. Instead, she’s as well-trained as Hillary Clinton. Both of these women looked to “play the game” of politics by the current rule book. Doubt me? Read this article again. It’s filled with both, both, both.

What has Bernie done for 40+ years? Sidestepped, challenged, overcome and refused to be dragged down by “the corrupt establishment rules.” The person who has the gold, makes the rules? Not in Bernie Sanders’ world. His very life is proof that you can refuse to give in to the system and still succeed. He knows this, and it is this deep confidence that provides him with a steely, unwavering, loyalty-inspiring backbone.

Elizabeth Warren lacks this. And, it is that weakness that leads her to advocate for horrible bedfellows. To intend to take bribes, sell your soul, and compromise your morals…to win? (We have to win!) Well, I just can’t support that. Can you?

In short. Elizabeth Warren is a good person who could have been a great player in the political field. Instead, she’s playing it safe.

Elizabeth is a pretty good orator, but she simply fails to truly believe in herself or the ideals she promotes. Parroting Pelosi’s “America is Capitalist” neo-liberal faith in Big Money, Elizabeth simply doesn’t believe Bernie’s success in 2015-16 (breaking every record in the book) is actually possible. I imagine, she sees it as a dangerously naive fluke. So, she’s hedging her bets and waving the flag of, “Dear Wealth Class, Don’t worry. Talk is just talk. With me, it’ll be business as usual. See you at the gala!”

She’s like the people at my local caucus in 2016 who said, “I love Bernie Sanders, but I don’t think he can win. Hillary knows how the game is played and she’s willing to do what’s necessary to get things done. Besides, she’ll beat Trump handily, and I want to see a woman in the White House before I die. It’s time.”

Only, it wasn’t. Because, sexism is a problem, no matter which way the bigotry goes. A human being must be elected based upon everything other than the body parts he or she was born with. Now-a-days? Those folks are pretty unhappy about how their strategy turned out. So, let’s not repeat it.

Elizabeth Warren says a lot of great stuff, on the campaign trail and she even promotes “safe & popular” legislative ideas that don’t upset too many people. But, in the end, she’s trying to keep one foot on either side of the fence. It’s a position of compromise and caution that the Democratic Party has mastered over the past thirty years, in order to maintain their illusion of social progressiveness while giving way to the insane economic desires of an out-of-control wealth class. Promising to change policy, while serving the same economic masters?

That’s just window dressing, and we need to really know and accept this, when we consider her as a candidate.